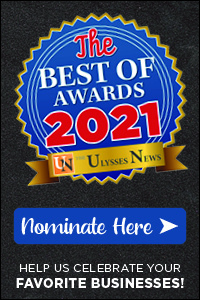 Margaret Marie Holt, age 103, of Ulysses, Kansas, died Saturday, November 28, 2020, at Western Prairie Senior Living Community in Ulysses, Kansas. According to her birth certificate and the doctor, she was born on October 7, 1917.  However, according to Margaret, she was born early in the morning and the doctor was confused on the date, and she was actually born on October 8, 1917, in Plains, Kansas, the daughter of Jerry and Alverna (Geisinger) Golliher.

Margaret graduated from Plains High School in 1936.  She then continued her education at Dodge City Community College.  Following college, Margaret worked at Plains State Bank for three years and Peoples Bank in Liberal for two years before she married Harold A. Holt on November 11, 1942, in Garden City, Kansas.  They lived in Marion, Plains, and Meade before moving to Ulysses.  On June 22, 1953, they moved into their home on Wichita Drive in Ulysses where she lived until two months ago.  Margaret was a homemaker; den mother when her sons were in Cub Scouts; a member of the American Needlepoint Guild; a Superintendent of food preservation at the Grant County Fair from 1970 – 2008; and enjoyed doing all kinds of crafts.  Margaret was also the secretary/treasurer, for ten years, for her husband’s Air Force Reunions.  She was baptized on September 16, 2001, and attended the First Baptist Church in Ulysses.

Funeral service will be Saturday, December 5, 2020, at 2:00 PM at the First Baptist Church in Ulysses, Kansas, with Reverend Jay Mykytiuk and Richard Smith officiating.  Interment will follow at Ulysses Cemetery. The service may be viewed on Garnand Funeral Home Facebook Live.  Arrangements are in care of Garnand Funeral Home, 405 W. Grant Ave., Ulysses, Kansas 67880. Condolences may be posted at www.garnandfuneralhomes.com.