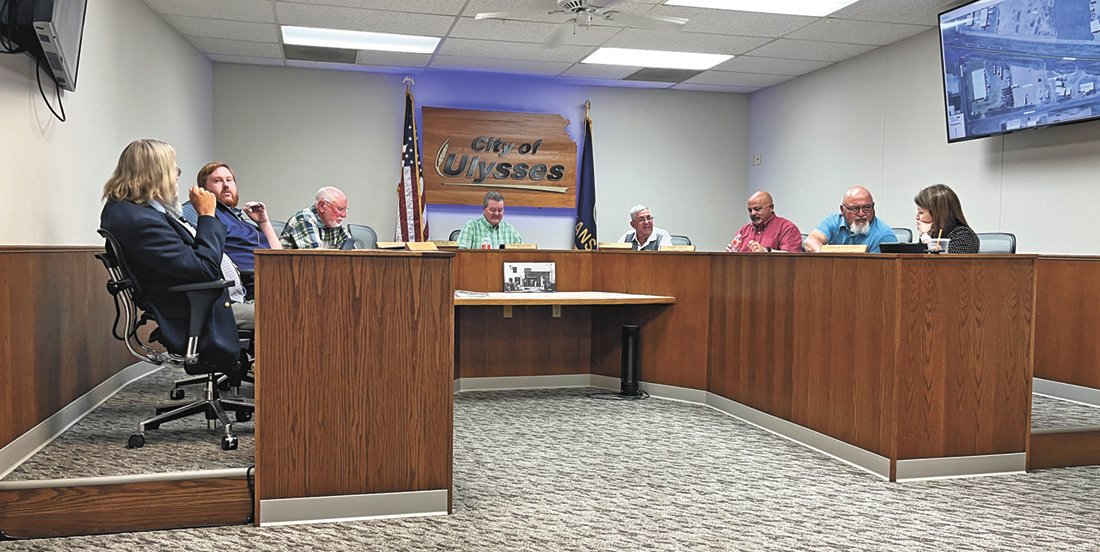 The Ulysses City Council held their meeting on Wednesday, April 13, 2022.

The meeting was called to order at 5:00pm by Mayor McCauley and led in prayer by Mark Diaz. The consent agenda was accepted and approved by the Council.

Marieta Hauser with the Grant County Chamber of Commerce visited the Council. Hauser asked for permission to close off the 100 Block of Baughman Street for the WEEE Entertainment Carnival. Hauser told the Council the carnival was not available to come the first week of June, but they were able to come May 12th through 14th. Hauser told the Council this is the same weekend as the Ulysses High School graduation ceremony, stating this could be a good opportunity to host a carnival due to families coming into town.

The Council verbally gave their approval for the Carnival.

The Council did not make a motion to appoint a City Planner to the vacant position.

The Council moved and passed the motions to approve Justin Ford - Master, Aaron Metcalf - Journeyman, and Dave Metcalf - Master to the Board of Electrical Examiners.

The Council moved and passed the motion to appoint Octavio Banuelos, Rafael Esser, and Dexter Peters, to the Plumbing and Mechanical Examiners.

The Council moved and passed the motion to appoint David Norton to the Economic Development Board.

The Council moved on to the Water Tower Painting and Repair and Engineering Agreement. Olson told the Council the City received about $425,000 from the American Rescue Plan Act (ARPA) last year, and he had been waiting to get the guidance to spend the funds. Olson said this fund could go towards water and sewage infrastructure. Olson, Ruben Flores, and Pete Earles with Earles Engineering collaborated to discuss the water tower. Earles and Flores explained photos to the Council, showing areas that need cleaning, repairing, and updating. Earles said overall the cost would be about $300,000. Earles told the Council, if approved, he would start looking for bids, mentioning he had about five or six bids for fixing Hugoton’s water tower. Guy asked how long the water tower would be drained, Earles answered “60 to 90 days.” Guy responded, asking how the water pressure would be without a water tower. Earles and Flores stated the water pressure would not be affected due to the water wells.

The Council moved and passed the motion to accept the agreement with Earles Engineering to start the Water Tower Painting and Repair project.

Earles moved on to tell the Council about a potential road project on the intersection of Stubbs road and Highway 160. Earles said the State had already filed a report on that intersection. Earles said he is waiting to receive that report, then he would continue on from there. Earles said he is not sure what that report includes, such as turn lanes, but said the total cost could be around $1.3 million, with the state paying a portion of it.

Earles moved on to tell the Council about a potential project in front of Kepley Middle School on Colorado street. Earles said there was potential funding for a flashing light crosswalk across Colorado street to help students cross the street, as well as extending the curbs inward to make the crossing smaller. Earles said the project could cost about $280,000, and more details of this project would be discussed.

The meeting was adjourned by Mayor McCauley at 5:56pm. The next regular meeting of the City Council is scheduled for Wednesday, May 11, 2022 at 5:00pm at City Hall.