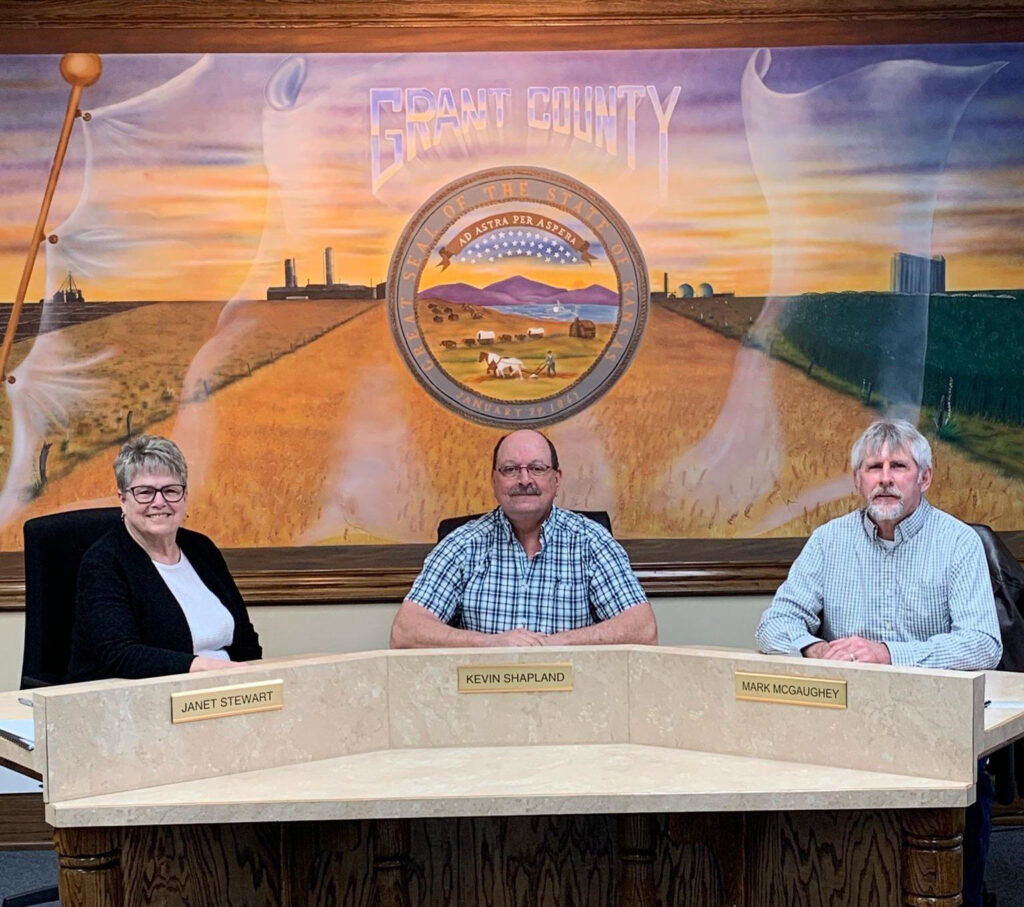 The Grant County Commissioners met on Tuesday, May 3, 2022 in the courthouse. The meeting began at 9:00 a.m.  Chairman Mark McGaughey led the Pledge of Allegiance and Commissioner Janet Stewart offered the prayer. Also in attendance were Commissioner Kevin Shapland, County Clerk Sheila Brown and Tammie Hensley from the Ulysses News. Department heads were on hand to give their monthly reports.

Fire Chief John Crosby said that his department had nine fire runs during the month of April. They also provided mutual aid to the Meade County Fire Department. The fire 1 class is complete and he is waiting on the test results. Crosby also said that all the fire trucks are operational since receiving the truck back which was damaged in the December dirt storm.

EMS Director/EM Coordinator Jeff Baier reported that they had 42 calls during April. The EMT class is continuing. He will take part in the FEMA meeting.

Sheriff James Biddle reported there were currently 27 in jail and that they had made 14 arrests in April. He said there have been a lot of thefts around the county lately. He asked if the paper could mention that residents need to keep their outbuildings locked and call law enforcement if there is suspicious activity.

Mari Honstead said that the Civic Center has been busy with lots of events. In April, they had UHS Prom, Spring Fling and several meetings. May will include a stock show, Kindergarten Ag Day, Baccalaureate and quite a few birthday parties. Mari also reported that the lights north of the cattle barns were out and Pioneer Electric will replace those lights.

County Treasurer Terri Trotman said that her office has been busy collecting second half property taxes. She also said that they had been busy with driver’s licenses and tags.

County Clerk Sheila Brown reported that the wildlife and parks department in Kansas has changed their system for permits. She thinks that this will encourage people to do it at home instead of coming in to the courthouse.

Register of Deeds Dana McDaniel reported that her office has been busy with documents and passport activity. She still has an opening for a part time employee and will be interviewing a candidate this week.

Brown said that she had a discussion with McGaughey regarding employee evaluations. They wanted to know what the department heads thought about doing the evaluations. Brown said that evaluations are in the policy manual. If they decide not to do them, that part of the manual needs revision. The commissioners

The department head meeting concluded at 9:27 a.m. The regular meeting continued with Crosby who presented a list of equipment that the fire department needs to replace. He said they need new bunker gear. The cost for 23 sets is $88,550. He also would like to purchase an extractor which is used to clean their gear and a dryer rack. The extractor is $7,268 and the rack is $5,000. Crosby also wants to purchase replacement air packs. He said they had two that failed at the last fire. The cost for 16 MSA packs is $128,988 for a grand total of $229,806. Crosby also said that the first-out truck is 29 years old and is scheduled to be replaced at 30 years. The cost for a demo truck would be $340,000. The equipment fund currently has $290,000 in it. He will continue to look at good used trucks and keep the commissioners informed on the progress.

Shapland moved to approve the purchase of the bunker gear, extractor, dryer rack and air packs at a cost of $229,806 with $224,317.05 coming from ARPA funds and $5,488.95 to come out of the fire department’s equipment fund. Stewart seconded and the motion carried.

The commissioners heard next from Honstead who had pictures and a price list for the new display cases for the fair. The cases will be built by the Civic Center employees and the cost per case is $445. A total of 13 cases are needed, so the total cost is $5,785. Stewart moved to approve the supply purchases at a cost not to exceed $6,000 and Shapland seconded and the motion carried.

In other business, the commissioners approved wage increases in the Sheriff’s Department, with the agreement to start working on the pay plan. The minutes of the previous meeting and the claims against the county, with the exclusion of the payment of a Rotary membership, were approved.

Terri Trotman came in to discuss her request for a raise. McGaughey said that they wanted to see how the budget looks before they give salary increases.